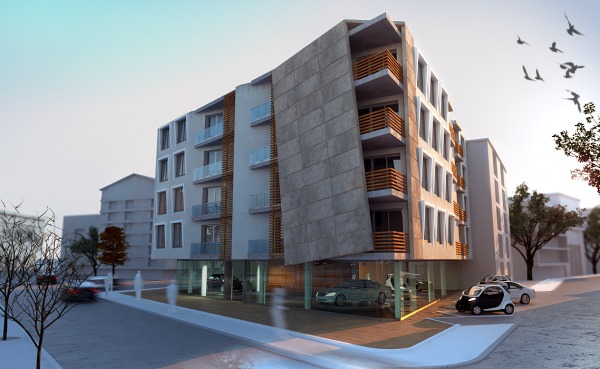 Each year millions of apartment complexes are built all around the globe. According to IBISWorld the total expenditures for architectural design services is an astounding $154B globally. Most apartment complexes in Europe, are built in tight urban areas that often pose difficult spatial constraints and design challenges to their owners. Most often developers end up with dark rooms, unnecessarily long corridors and inhabitable spaces. Crowdsourcing these wicked contextual challenges can offer a reliable alternative to overcome spatial constraints and develop out-of-the-box design solutions. Arcbazar offers an online platform that allows clients to post such and similar architectural challenges to designers all around the world.

Cagri Y., a developer from Cappadocia in Turkey, faced peculiar site constraints of a land he purchased to build a five-storey mixed-use complex. The building consisted of retail space on the first floor and apartment units on the remaining four floors. The site was framed by one major road and two secondary roads on three sides, and was abutted by another apartment building on the fourth side. Cagri needed to place four units on each floor to have 16 apartment units in total. He hired a local architect who was not able to offer a sound solution that would satisfy the site constraints and make the complex worth his investment. As an alternative, he launched a four week crowdsourcing project on Arcbazar, and challenged designers around the globe, to develop solutions, that ensures each room getting natural light, offers minimum corridor space and gets him maximum square footage for his apartment units. “Initially, I had doubts that my problem could be ever resolved.”

Imdat As, founder at Arcbazar claims that “crowdsourcing is especially great for wicked problems that pose difficult design challenges to clients with limited resources. At Arcbazar, we ran projects from awkward closet spaces, to difficult site constraints, to vacant/under-utilized programs, and deprived urban conditions.” Over the four week time period, Cagri received 21 design submissions from all around the globe. He picked a design by Davide Roth, a young architectural designer at CSRArchitects from the UK, as the winning scheme. “I can definitely say that my vision has broadened dramatically through this process [at Arcbazar]. Now I know that there is really nothing that cannot be resolved architecturally,” Cagri says, “I am so happy that you exist Arcbazar!”